“Your ego is writing checks that your body can’t cover.” Ed Kirby, MD (my orthopedist)

I’d been thinking about doing this hike for years. Some hikers get bitten by the bug – you look at a map and you see possibilities. What’s it like in there, that huge area with no trails? See that incredibly steep cliff – I wonder if there’s a nice spot on top of it to enjoy the view? After knocking off the hikes on my lists (Catskill 35 and Winter 35), having fun playing with routes (the most peaks in the shortest mileage is one fun challenge; the most creative way to approach a simple peak or range is another) became my approach to hiking the peaks I had come to know and love.

The Nine is a hike that lots of hikers do. It is a long and difficult hike that requires mental stamina and a willingness to be poked in the eye and scratched up. Four of the nine peaks are trailless and while some have standard routes and de facto trails (called herd paths but they’re made by herds of humans not four-leggeds), these paths tend to come and go and may be deceptive. Navigation skills are necessary and determination and a sense of humor are also required. Once the bushwack peaks are completed, no matter how you slice it you have a lot of miles to cover to complete the remaining 5 peaks.

I’m not young and not in the shape I once was. But I am competitive and my ego is always hungry for the next opportunity to prove myself. The Nine was alluring but I knew I’d need to be at the top of my game to do it. There is precious little cell coverage in the woods, and getting halfway through before deciding to bail out would be a regal pain in the logistics. I wanted to do it, but I also wanted to do it well.

This past summer everyone and their uncle did The Nine, or so it seemed to me. Someone spit in my drink; it just wasn’t special any more. And yet I knew it would be once I got out there and started hiking – all notions of comparison and competition would evaporate and I’d just hike my own hike. I knew that, but somehow I felt like I needed to tweak it, to make The Nine my own.

I found a way to do so… I did The Twelve! In June of 2014, New York State’s Department of Environmental Conservation in partnership with the New York New Jersey Trail Conference opened a new trail that traversed three mountains in its 9 miles. From the village of Phoenicia it rises to meet the Wittenberg-Cornell-Slide Trail after ascending up, over, and around Mounts Cross, Pleasant and Romer. I found my way to do The Nine – the walk out from the high peaks would be down this trail.

To prepare the first step was to find a hiking partner. Easier said than done, I wanted to hike with someone who was a) physically capable of doing 26+ miles of tough hiking without whining (I figured I’d whine enough for two); b) ego driven enough to want to do this; c) wise enough to override the ego part if need be or if illness/injury arose; d) personality-wise someone I could tolerate for the whole adventure. It was a tall order. I found a tall young man to fill it. David Bunde met all the criteria and will likely never hike with me again! (just kidding, I hope).

We planned via emails and one 18 mile prep hike. We divvied up responsibilities ( he handled navigation, I handled a water stop… which ended up going awry but it was well intended), and discussed every angle of the hike in detail over our 18 mile warm up and in emails right up til the night before. We covered the route in excruciating detail, and the items in our packs, and our meal plans, and on and on. We planned sock changes. We planned bail out points. We planned contacts with our spouses. We planned beer for the parking area. We discussed everything we could possibly consider in advance of the big day.

I got the most unrestful, interrupted, excited/nervous sleep ever the night before the hike. The alarm went off at 4:30 a.m. and after peeling myself off the ceiling, I got my act together and was in the car, driving away by 4:37 a.m., a honkin’ big egg sandwich I prepared the night before in my paws and flagon of coffee between my knees.

We met at Lane Street and left David’s car there. We drove to Moon Haw. By 6:30 a.m. were ascending out first peak, Friday Mountain. I was all fired up.

Friday is a steep climb and we were sweatsoaked and tired by the time we hit the summit. It was exhilarating and such a breathtaking day – cloudless blue skies and the Ashokan Reservoir looking like a mirror, reflecting blinding sunshine. We were at the summit by 8:30 a.m.

The bushwack section was a blast. Over to Balsam Cap in 45 minutes, and then up and at Rocky’s can in less than another hour. Rocky is the smallest of the Catskill 35, with an elevation of 3508. It was fun to think about doing the tallest (Slide at 4180 ft) in the same hike as the shortest. Rocky is also the most remote, flanked by Lone and Balsam Cap and is a great hike all by itself. I fell in love with its cliffs and balsams once again. It is a very special place, a place that drags trite phrases out of the most illiterate and unromantic hikers (that would be me I’m referring to – I found myself making LotR references and getting all misty eyed over the silence, the moss, the views, and the power of the solitude).

From Rocky we made it to Lone without a hitch, but hit some thick balsams on Lone’s western hip. I love the tough climb Lone offers – and instead of being dominated by balsams, Lone offers a deciduous forest full of massive birches. A great contrast after Friday, Balsam Cap and Rocky, Lone was a yellowy green respite.

On to Peekamoose, via a land bridge that I fussed about in the emails way too much. David hit it spot on and then guided us perfectly to the Peek-Table col. Not a step wasted, we hit the trail after 6 hours and 7 miles of bushwacking. And we were tired, grateful for a break from working so hard on placing our feet for every stinking step, and ready to stride with a fresh enthusiasm.

We shared the Peekamoose summit with a sweet little garter snake and ate food. PBJ #1 for me, and I sucked down another liter of water, this one infused with a NUUN energy tab (alka seltzer for the exercise nut, it contains electrolytes, B vitamins and caffeine).

We saw our first human on the way down Peek. A solo hiker probably smelled us before he could see us and we greeted him quickly as we ran (yes RAN) down Peek. We saw our second and only other hikers of the day on Table’s summit where we stopped for a quick photo.

Trail miles go by more quickly than bushwack miles and by 2 pm we had made it to the Neversink River (approximately 3 miles from the summit of Peek). I waded in barefoot and was never more grateful for the numbing effect of the freezing water on my barking dogs. My toes were starting to get sore from the toejamming downhills and my Achilles tendons were whispering about rupture (that’s rupture, not rapture). I’ve had Achilles tendonitis for a decade and rupturing a tendon was my single biggest fear about the hike. After fresh socks, refilling my water from the river (yes, I drank it unfiltered or treated, and it tasted like it had been running through the balsams – what an amazing flavor!), and taking some advil, we set off. 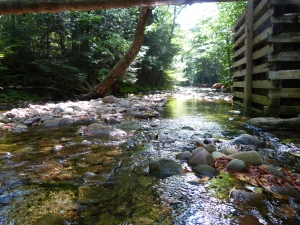 The Burroughs Range was next: Slide, Cornell and Wittenberg. From an elevation of 2240 at the riverside, we were about to ascend to 4180. After hiking 8 hours and covering 6 peaks, and about 10 miles, we were starting one of the most fun and challenging shorter day hikes of the Catskills. It was an awesome feeling.

The ascent up the Curtis Ormsbee trail was wonderful – nice and gentle – but we were already flagging and tired. David was getting winded on ascents; I was getting wicked sore on descents. Our progress was slowing down, and we were getting somewhat less cheerful. The descent of Slide was tough and slow, placing each foot carefully to make sure we didn’t fall or get hurt. The miles that lay ahead were not fun to consider and we could see that we were running out of daylight, about an hour faster than we’d hoped. We tried to hurry through the long Slide-Cornell col but you can’t hurry love (thank you, Diana Ross). It was in the Slide-Cornell col that I started to hallucinate. Nothing major, just shadows. You know – dehydration maybe, or just eyestrain?

#8. Count the fingers that are down.

You can see how I felt by the time we reached the summit of Cornell, but the walk from there to our final summit is mostly very simple. Mostly, except for the infamous Cornell Crack, a rock formation that eats up hikers and spits them out in broken or at least dislocated pieces lay ahead. After 19 miles and too many hours, it was a little intimidating to say the least. I handled it by going too fast to get scared, lowering myself in, praying, and falling to the next level. It was fine. Just a little rock scramble.

On Wittenberg, we ate more food, drank more water, texted our spouses with an ETA of 11:15 pm at the Lane Street trail head. We had 10 miles to go and estimated 5 hours to do it in. We watched the moon rise from the viewspot on the new trail, an open bald that offers 360 degree views. I was almost brought to tears by the enormity of the beauty. And the fact that I had 6 miles to go in total darkness with toes that felt like they had been hit with hammers. Repeatedly.

We did well, maintaining a 2 mph pace by headlamp for the next 6 miles. We joked, I threatened to sing, we still laughed and talked here and there, but mostly we just walked. My knees started to beg and cry for mercy, my quads told me in no uncertain terms that they were leaving me for someone younger and prettier, and my toes said black is the new toenail color.

We gritted our teeth, got bursts of adrenaline each time we saw glittering eyes in the headlamp’s glare, and kept walking.

And then we were there. My husband was shoving cold beers and hot pizza into our hands and I was peeing in the shadow of the truck, taking off my boots and swigging a strong brew all simultaneously, it seemed. David drove home in much the same haze I was in – exhausted, delirious, and in total awe of our accomplishment.

I couldn’t sleep that night. I fell asleep but woke and was restless, my legs on fire and my mind racing. I drank more water and eventually just got up.

I’m sore, but not miserable. My quads and glutes haven’t forgiven me and my toenail is still considering its options, but I’m walking and even hiking with the dogs a little after only 24 hours rest.

I’ll never do that particular hike again, and maybe I”ll never do the 9 the “easy” way, but I’ll certainly explore more long tough hikes. But not too soon.

This entry was posted in Catskilliana, Hiking. Bookmark the permalink.

5 Responses to The Twelve