Some people enjoy dog walks. I survive them. Each day when we arrive back home – INSIDE the house with all the dogs (because until we are inside with the door closed, all bets are off) – I breathe a sigh of relief and feel a surge of triumph. We all survived; me, the local flora and fauna, and the dogs. Nothing bad happened.

When Tom gets home from work and asked how my day was, that’s what he wants to know – how did the dog walk go? “Nothing bad happened” is the norm and the background from which the porcupine-bear-coyote-deer-human misadventures stand out in high relief. Nothing bad happened is what we all want and need, and yet…

Dogs are my adrenaline rush. They are my class five rapids, my free climbing. They are my arena in which I test myself and where I learn my hardest lessons. They are where I explore the edge of what’s possible for me in terms of personal power. Most people don’t have five extra-adrenaline dogs and of those that do, most don’t walk them off leash in wild places filled with enticing creatures like bears and porcupines. As a 50+ year old woman, personal power tends to be a bit elusive. Yeah yeah yeah – Tom will claim I’m not lacking in personal power — often when I meet people for the first time, they are astonished at how physically small I am. On Facebook you seem much bigger, they often say. But the truth is a) female, b) over 50, and c) physically petite add up to a deficit in the personal power department.  I make up for that by having large dogs (literally and figuratively) and bossing them around. 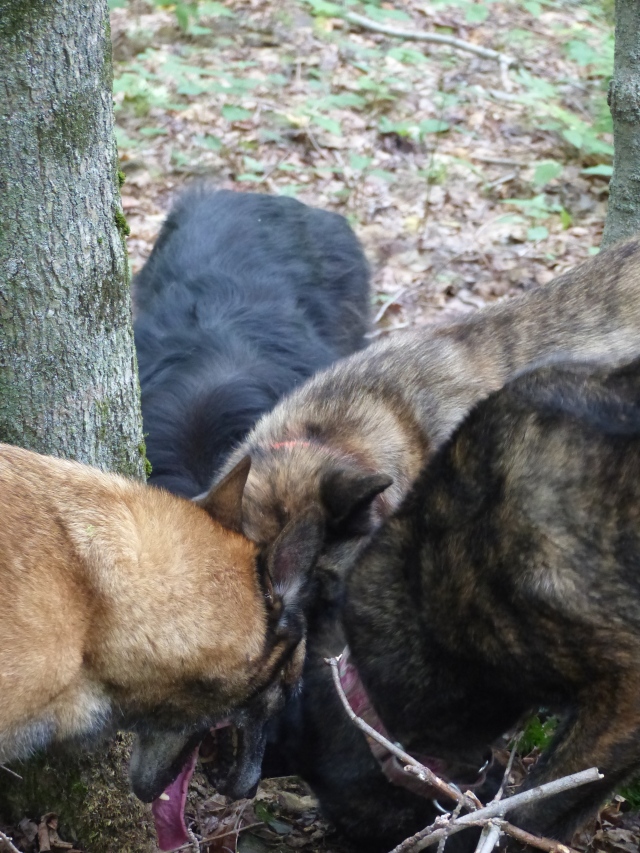 Today we reached a point in the dog walk where we have options. It was raining steadily and we had Lily with us. The short route means hanging a left and heading downhill. Going straight involves prickers and bushwacking and most likely coyotes and deer and quite possibly human remains (Ok, not really. It was most likely a pig. That’s the consensus – pig. But for a while there a bunch of smart people were really stumped. I called the police. But you have to realize that for me to have anything to show the police, I had to take the chunk o’ flesh from Hawkitt and carry it home. Meditate upon that for a moment, friends. Super repulsive, and what an amazing dog to hand over a prize like that just because I said so.).

Hawk stopped at the crossroads and gave me a meaningful look. GO THE FUN WAY, he said with his eyes and his seductive low rapid tail wag. Come on, Hawkie, I cajoled. This way. He looked stricken, pained even. He hesitated. Come on, buddy. This way. All the other dogs stopped, waiting. What would it be – cooperation or a merry chase? He looked at me, then swung his enormous head in the direction of mayhem. He looked back at me fetchingly. No, I said. This way.

I stood aside, making room for him, and gestured with my arm. This way. He turned his back on all that was wonderful in the woods, and trotted downhill, heading for home.

Why? Why give up and do my bidding? He didn’t get anything for his sacrifice – no treat, no reward, barely a “good dog” and only the most cursory pat-stroke as he surged past me on the steep slope. I don’t know why. I have a few guesses but I figure they are likely anthropomorphic assumptions and undereducated fantasies. They include: He is a nice dog. He loves me. He values pack harmony. He respects my authority. He knows “this way” is a command and he must obey commands. Who knows… maybe the last time he ran with the coyotes they were impolite or laughed at him behind their paws and refused to explain their jokes to him. Whatever went on inside his thick skull, it ended up with him choosing to substitute his agenda for mine.

But tomorrow? I take nothing for granted. Tomorrow we will play out this drama again, and the ending may be different. The other dogs may take on his role while he plays the obedient one. Anything might happen. And I admit it: I kind of hope it does.

This entry was posted in the woof pack. Bookmark the permalink.