From Bedlam Farm to Bramley Mountain: Good Ideas, Bad Writing, and Matters of Life and Death

A few days before Mica died, I let her rough house and wrestle despite her chest full of cancer. I wrote “my poor judgment and failure to protect her from her own impulses could well have cost her her life.” That’s it right there: life and death. It is normal, natural, responsible, and in some cases the law to protect dogs from their own impulses. And it isn’t always possible. Nor is it always what I will choose to do. But that choice always weighs heavily upon me.

I think about how to manage my dogs all the time. A bit like human children in this regard, they consume my intellect and psyche with their ravenous appetites and big sharp teeth. I am responsible for their health and safety, and at least nominally, I’m in control. 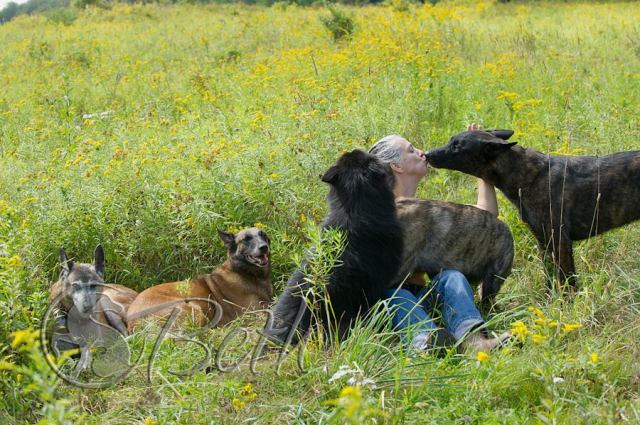 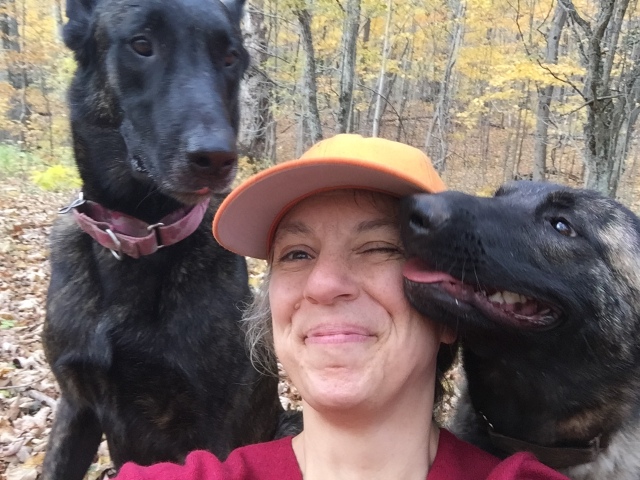 But how much control do I exert? I’ve written about this before (most of the posts in the woof pack category on this site), and I’ll probably write about it again. My pack and I inhabit the space where safety and responsibility intersect with “let dogs be dogs.” Dogs are carnivorous predators. My role is to keep them safe, but also to keep the world safe from them. Letting dogs be dogs has risks and those risks translate into expenses: both veterinary and spiritual. When my dogs kill wildlife, I pay twice. Sure, the porcupine paid with its life, but the vet visits are stacking up and the dog is still a mess, and my guilt is not assuaged…

There’s a blog post by Jon Katz making the rounds. It’s from March 2016, but like many iconic posts in the dog world, it is once again getting the shares and likes on social media. It’s called The Rainbow Bridge Curse: Loving Dogs Into Dumbness. A little clickbaity, sure, but what he has to say is interesting. Only I can’t in good conscience tell you to read the post because it’s so full of typos or software glitches or proofreading failures … it’s actually incomprehensible at times. This is a famous writer – someone who got an agent, a contract, money, fame… and ok, I forgive the occasional typo especially in a Facebook post if you’re over 50 and using an iPhone… but for heaven’s sake PROOFREAD. However, he’s writing about this very issue and it’s always interesting to compare and contrast one’s own beliefs and practices with those of folks with stature in the community and the label of expert upon their lapel.

In the blog post, Katz posits that “letting dogs be dogs” is the best form of dog ownership and management. Basically he thinks modern dog owners have become helicopter parents, anthropomorphizing their carnivorous predator pets into furry human children, and then coddling them into becoming soft-boiled morons. He further suggests that dogs need to be dogs (i.e. uncoddled) in order to learn, grow, and develop their intellect.

One of the examples he provides of coddling dogs is not cooking them in hot cars in the summer. Here’s the passage that addresses this:

It is a tragedy for dogs when people tell me they are afraid to take their dogs along with them when they do chores in warm weather, another new kind of social abuse in the guide [sic] of animal welfare. Dogs have accompanied us on our rounds for centuries, very few have died for it.

So, let me get this straight: it’s actually ok to bring a dog along on a hot summer day and leave the dog in a car while you run errands, despite what we know about that car’s interior temperature… because dogs somehow learn from being overheated? Assuming the dog doesn’t die, what does a dog learn from being trapped in a hot car?

Perhaps I set up a bit of a straw man there, and perhaps Katz would never state, point blank, that leaving a dog to overheat in a car in a shopping mall parking lot is a learning experience. The problem is he doesn’t make those distinctions, and doesn’t leave room for nuance. He’s painting with a bit of a broad brush and the devil is always in the details.

For example, today I took Brody (my dog) to go meet Cooper (my neighbor’s dog) for some play time. We’d never tried this before because, quite frankly, Brody is not right in the head and I wasn’t sure he could handle something as simple as a playdate with a puppy. Using Katz’s framework of letting dogs be dogs, not helicoptering, and not micromanaging, we would have let both dogs off the leash and allowed them the space and freedom to work it out. Brody probably would not have injured Cooper, and Cooper would have had lots of fun trying to get poor psycho Brody to play. Would Brody have bolted? Run in the road? Taken off into the woods? I can tell you, knowing my dog as I do, the one result I would not predict is that he’d learn something positive from being tossed into this situation. So I coddled. I controlled. I kept Brody on a leash and requested that Cooper also remain leashed. We just did a short parallel walk and then I took Brody home. A few minutes of increased stress for the BroMan but nothing bad happened. And we can try again.

Was that cruel of me to deprive Brody of that opportunity to navigate his own emotions? Was it “emotionalizing” him and did it harm Brody’s admittedly damaged and limited intellect? Maybe. But maybe not. Maybe just the opposite. You see, Brody is a hot mess for a reason, or a bunch of reasons. I don’t know all the reasons why he’s so broken, and I don’t bother making up stories about his past. All I know is the dog in front of me is a basket case. Placing him in situations that terrify him is akin to leaving him in a locked car in the summer, sitting on asphalt. I just don’t see a lot of learning happening. Stress, and possible damage, but no development of instincts or intellect.

I think what Katz might be missing is that a lot of learning happens when dogs feel safe. Try screaming and beating a dog to get him to do something. Might work, might not. You’ll get a scared, stressed dog along with the possibility of compliance. But try eliciting that behavior with a treat or praise or a lure and it might work too. What motivates dogs, lights them up, and develops in them an eagerness to work with you? Fear or affinity?

Foster Tonshi, completely lit up like a Christmas tree at the prospect of working for the next toss.

What happened in Katz’s post is that his fundamental decent idea got backed into a corner and came out swinging. If we just stay with the basic idea that dogs (perhaps like humans?) need a certain amount of freedom and space to explore their world, and that doing so within safe limits fosters growth, learning, and a reasonable level of fulfillment, I’m on board. I agree that some dogs are really dumb, but how did that happen? Did we dumb them down by “emotionalizing” them? I think we have to look at genetics as well as experiences to fully grasp that. Bloodlines, temperament, overall health – there are a lot of factors that contribute to the appearance of what humans might call intelligence in a dog.

Overall, are dogs any dumber than they were a human generation or two ago? It’s an interesting question. What evidence could be used to demonstrate such a claim? What studies have been done to test that theory? Are we just considering it true because we see the ridiculousness of modern dog ownership in purse puppies and absurd animal welfare laws? Are dogs the ones who have been dumbed down, or is it humans that have become less sharp, less eager to do the hard work of critical thinking, less open-minded and curious, and increasingly quick to jump on bandwagons of blame or reactionary  fantasies of ‘the good old days’?

That basic idea of freedom and space and the push-me-pull-you of safety versus risk is where I live. Bramley Mountain has become shorthand for all of it – the risks, the danger, the bad decisions and lost lives, and the profound soul-deep satisfaction of a dog (and a human) that is allowed to fully express his or her dogness. It’s easy to romanticize such freedom, and it’s easy to champion it when you’re not living it. It looks awesome from the outside. Standing over a lifeless coyote that my dog just executed, it’s a little harder. The coyote paid with her life for a dog that was not under my control. What if it was my neighbor’s cat? Would we still be arguing for growth and learning? Or would we be calling my dog aggressive and dangerous? She was just being a dog. Dogs are territorial carnivorous predators. I cannot ever forget that fact.

This entry was posted in the woof pack, writer's life. Bookmark the permalink.

2 Responses to From Bedlam Farm to Bramley Mountain: Good Ideas, Bad Writing, and Matters of Life and Death